That’s how I was thinking, in nervous chunks, just like that.

But they went. And I couldn’t even watch them walk away because I knew I would run right back into my Dad’s arms forever if I did.

I fought to keep the lump in my stomach from erupting into tears. This was the first time I had ever flown in an airplane and I was doing it all by myself. Even the thought of being alone made my eyes water again, so I stared at my shoes. By the time I reached the front of the line, I was a frizzy haired, red faced, and puffy eyed mess. My emotions were playing tug-a-war.

What if that was the last time I see my family and I didn’t watch them go? Oh God, no. I’m going to cry. Here it comes. 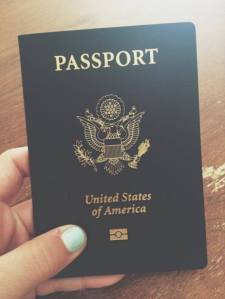 Oh. Yes. Passport. I handed it over. The lump was clogging my throat now and attempting to say anything would pull the plug on a waterfall of tears. This always happens whenever I get homesick–I go mute. Not very helpful in an airport.

“Here you go, ma’am. Save travels!” I gave him a thankful nod. Somehow I was able to nod my way through security, hundreds of people, and into my very first airplane seat without saying a word.

Faster and faster and louder and louder. We continued to charge down the runway until we tilted upward and defied gravity.

We soared over the twinkling lights of the city. For whatever reason I pressed my forehead against the window to look for my family’s car. (I didn’t see it if you were wondering). The plane flew higher until the city glow faded away. We broke through the clouds just as the glorious sun was rising. It was one of the most beautiful things I have ever seen. 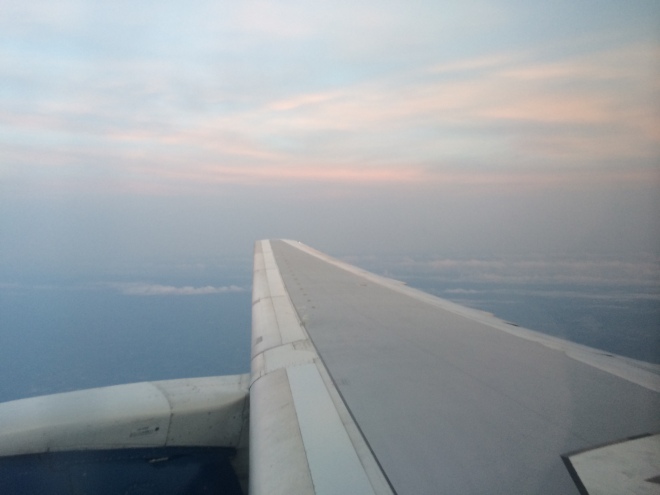 Sometimes in life we are given an airplane.

A transition. Maybe it’s a job, college, or a move. It could be as simple as getting a gym membership or realizing that you deserve better than the relationship you are in. Transitions and changes are so scary. You could be alone, sad, poor, or extremely stressed. There might be days when you feel like you’re going to crash under the pressure of it all.

I think the best thing we can do is nod. Like me in the airport, sometimes it’s the only thing we can do. Do you believe that He loves you more than anything else he’s created? Do you believe He has a plan for your life? Whether you do or not (because sometimes we don’t), nod your head to his promises and let him carry you through the pain, the fear, and the loneliness.

Because too often we try to fly ourselves. When we do that we end up overwhelmed, lost, and stranded on a deserted island. But even then, when everything seems hopeless, it’s not over. God is always ready for a rescue mission when we give him a simple nod in his direction. So let go of whatever is keeping you on that island and trust in the pilot who knows exactly where he’s headed.

This is so comforting to a college girl who doesn’t know what to think half the time. I can barely order food at a restaurant much less decide on my future career. But how special is it that God gives us more than what we ask for? Our minds are so limited that we can only see the ‘island’ we are on and nothing beyond it. Which makes sense; we are human. And surprise, surprise, humans can’t see the future. (or across the ocean for that matter).

So then, I will step on the airplane with the pilot who holds the future in his hands.

The pilot who can carry me through the storms.

The pilot who welcomes everyone on board.

Will you come with me? With God as our pilot, we will always reach our destination and he guarantees it’s going to be more beautiful than the place we left behind.

Song // Touch the Sky by Hillsong

other things i think.